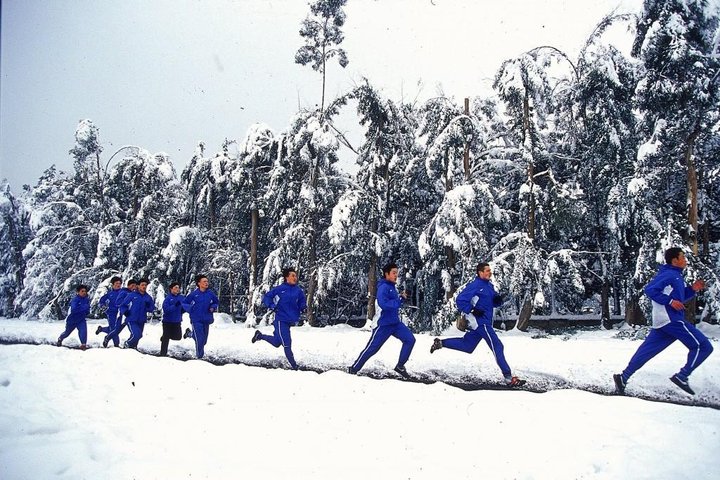 Despite the weather we still had a few games on and the bitter cold and bright winter sun couldn’t stop the goals from flying in!

Leamington Hibernian 8 (eight) Radford Semele Social Club 0
A hat trick apiece here for David Jones and Connor Farrell. Wendel Moyo and Connor Carson getting the others. Hibs go into the next round and Radford go into the Supplementary Cup.

Khalsa 0 Bishops Itchington 4
Only a brace in this one for Josh Turton. Johnny Adair and Adam Miles with the other Bishops goals to give them the points in this mid table clash

Chadwick End 2 Dynamo Leamington 1
Dynamo went ahead on the half hour mark through Ryan Harris, but two goals in a twenty minute second half spell swung the game for Chadwick. George Curry and Oliver Senior doing the damage .

Ettington Rovers 4 Real Barston 2
Three valuable points for Ettington here as both sides fight for survival near the foot of the table. All the goals coming in the second half. James Stanley with a quick brace to put Ettington ahead. Gareth Davies pulled one back shortly after and five minutes later Barston were level through Christopher Gould. Two goals in the last ten minutes sealed it for Ettington as Kyle Nicholls and then Matt Toms pounced.

Radford Albion 4 Khalsa Reserves 3
Albion stormed in a three – nil lead inside the first half an hour here. It looked all wrapped up! Kurtis Wilde, Luke Farrugia and Brodie Culinan with the goals. Khalsa struck back in the second half and crashed in three of their own in a crazy ten minute spell Ricky Dhaliwal , Vasile Grajdieru and Istvan Demeter with the goals. With a minute left on the clock up popped Paul Murray to snatch a l;ast gasp winner for Radford to steal all three points!

Harbury 4 Kenilworth Royal Oak 3
A real nip and tuck here as a Dean Pugh strike on four minutes gave Harbury the fastest goal of the day start. The Royal Oak then had the better of the first half and took control with three goals from Owen Biggs, Nuno Corvelo and Biggs with his second gave Oak the advantage. The Oak caved in a thirty minute spell as Pugh went to town and put another three goals away in a thirty minute spell to take the points for Harbury.

Bulldog 0 Whitnash Sports & Social Club 2
A goal either side of half time was enough to settle this for Whitnash. Eamonn O'Brien with the first half strike and Michael Aulak with the second half goal enough to take the points for Whitnash.

Stockton 2 Kenilworth Wardens 2
An Ethan Price goal had put the Wardens ahead but Malachy Rose pulled Stockton level ten minutes later. Joe Ferraz then restored the Wardens advantage just before half time. The points were going back to Kenilworth but Ryan Barnard popped up with five minutes left on the clock to give Stockton a share of the points. Wardens left to rue their chances and could easily have gone home with all the points, but lose ground in the battle for top honours.

Upper Lighthorne 2 Sporting Club De Stratford 4
A Jack Reidy brace inside twenty minutes set the Sporting ball rolling here. George Dick added and made it three- nil just after the break before Aled Edwards pulled one back within seven minutes. Matthew Jones pulled one back from the penalty spot but it was too late. Dick finished it off with a penalty kick on sixty five minutes to give Sporting all three points.

 Weekly Round Up for Sunday 5th December 2021 Plenty of goals as we head into December!