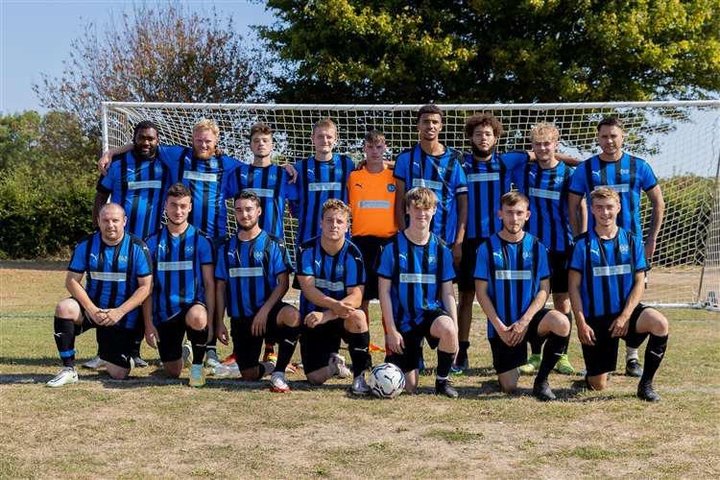 All the results and goals from the games today.

All games were proceeded by a minute of silence in memory of John Sharp who recently passed away. John was a member of the Leamington Referees association and served this League for over 45 years as a Referee and was recognised by the FA for his long and dedicated service. His funeral service will be held at Oakley Wood next Thursday (10th November) at 12.30pm and all are welcome.

We move on to the results and goals from today. We start as usual with some Cup results.
Division 1 Cup 22-23, sponsored by Anthony Eden Gents Hairdresser - Qualifier Group A
Engine FC 2 Bishops Itchington 4
Bishops were two up in thirty minutes through Andrew Yeates and Josh Turton. The second half was a fast and furious goal fest! Jordan Simpson stroked home a penalty five minutes after the re-start to give Engine hope. Johnny Adair then restored the two goal advantage five minutes later. With twenty minutes left Luca Valle then popped up to give Engine another glimpse of hope, but Martin Hutchcox replied five minutes later to wrap it all up.

We move on to the Division 1 Cup 22-23, sponsored by Anthony Eden Gents Hairdresser - Qualifier Group B

Leamington Hibernian 4 HRI Harbury 0
A brace in each half were enough for Hibs here. Jack Marsden and Reece Rawlings getting the first half goals, Lewis Barry and David Jones with the second half strikes.

We move on to the George Dutton Charity Invitation Cup 22-23 - Preliminary Round
AFC Snitterfield 1 Stockton 3
Richie Davies put Stockton ahead after twelve minutes. That’s how it stayed until fifteen minutes to go. Harry Jones made it all square but within a minute Ryan Barnard restored the Stockton advantage. Barnard added another ten minutes later and with only four minutes to go it was all done. Stockton through to the next round.

Sporting Foresters 2 Wellesbourne Wanderers 1
A Liam Miller penalty on ten minutes put the Woodmen ahead. Joshua Kilbride made it all square four minutes later. Just before half time and Alex Stevens restored the Foresters lead and that’s how it stayed. Foresters into the next round.

Dynamo Leamington 1 Kenilworth Royal Oak 3
A Lee Watton goal on the half hour put Dynamo ahead. Royal Oak were level a minute later via a Jack Coper goal. Two second half strikes from Jeremy Simmons and Jacob Whitmore sealed it for Royal Oak.

Heathcote Athletic 1 Pig and Fiddle 5
A Pedro Fernanades hat trick led the way for The Pig and goals from Robbie Stephens and Jason Thompson rounded it off. Pig into the next round.

We move on to Division 3
Cubbington FC 3 Cubbington Albion 2
A local Derby which was last played Thirty years ago! And it was a thriller! Albion stormed into a two goal lead after only twenty five minutes. Thomas Rowe and Ryan Yearsley grabbing the goals. Cubbington then staged a first half come back with goals from Adam Short and Luke Swinnerton. The second half was a keenly fought affair and with only five minutes left on the clock Chris Rogers stepped up to grab the winner for Cubbington FC. You will not have to wait 30 years for the return fixture!

Kenilworth Wardens 8 {eight) Napton 1
A Chris Watts goal on the half hour mark was little consolation for Napton as Wardens ruled the roost here. Dan Twigger had grabbed four goals inside the first half hour before Watts got Napton on the board. His fifth came half an hour later! James Butcher, Adam Hnat and Christopher Porter joined in with the others.

Kineton Sports & Social Club 0 Hampton Magna 3
Ryan Leahy, Dean Pugh and Jordan O'Keeffe were on target here for Magna who continue their 100% league form and sit clear at the top of the table.

Bowling Green 2 Newbold 9 (nine)
Second fastest goal of the day here went to Reece Mason for Newbold after only six minutes. Jordan Bedford added a second shortly after before Mason got his second. Jake Robbins pulled one back for Bowling Green. Alex White added a fourth for Newbold before the break. The second half saw Newbold pile it on. Joe Wright, Bally Atwal and Daniel Griffin all scoring before Giovanni Goldswain popped up to get a second for Bowling Green. Wright then got his second to round it all off with two minutes to go.

HRI Harbury Reserves 2 Foresters 5
A Luke Sangha brace was not enough for Harbury here as Foresters took control. A brace apiece for Shamir Entezar and Tye Fulford, and the odd single from Thomas Scott.

Long Itchington Reserves 1 Whitnash Sports and Social Club 2 Fastest goal of the day here for Will Bradbury after only five minutes but Whitnash had turned the game before half time with goals from Louis Todd and Paulo Mota. That’s how it stayed.

Wellesbourne Wanderers Res 0 Southam Sporting 8 (eight)
All one way traffic here and Southam sportingly shared the goals around. Pick of the bunch came late on when Centre Back Alex Campbell was put up front for the last ten minutes of his last game before moving to Australia. A team passing move which led to a through ball to Harley Francis who squared the ball to Campbell who thundered home his shot from twelve yards. The other goals came from Ethan White, James Davis, Joshua Thomas, Cameron Hill, Keir Wood , Luke Hurst and Harley Francis.

Latest weekly round up. 30.Oct. 22  All the results and goals from this weekend.