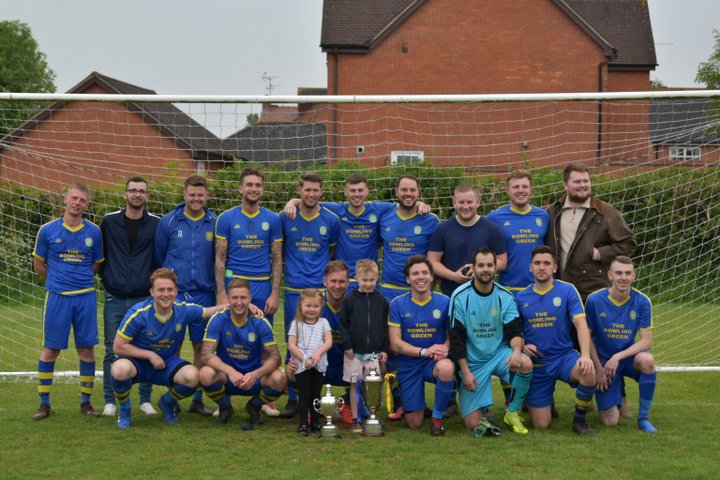 This year’s Cancer Cup Final was an excellent contest in front of a decent crowd taking over £300 on the gate, between Bishops Tachbrook and Westlea Wanderers at Stockton Football Club, with all proceeds from the competition being donated to Cancer Research.

Bishops, in their first season, have already captured the Division Three title, and have, in Adam Knight, the league top scorer from all divisions, while the highly experienced Westlea Wanderers are hoping to repeat their last season’s achievement of the Division One title and the Challenge Cup double.

The game started at a high tempo, and it soon became apparent that the Division One team were not going to be able to cruise past their Division Three opposition. Bishops piled on the early pressure, and got their reward after twelve minutes when Adam Knight was on-hand to pounce on a mistake from the Westlea ‘keeper to poke the ball home for an early 1-0 lead. 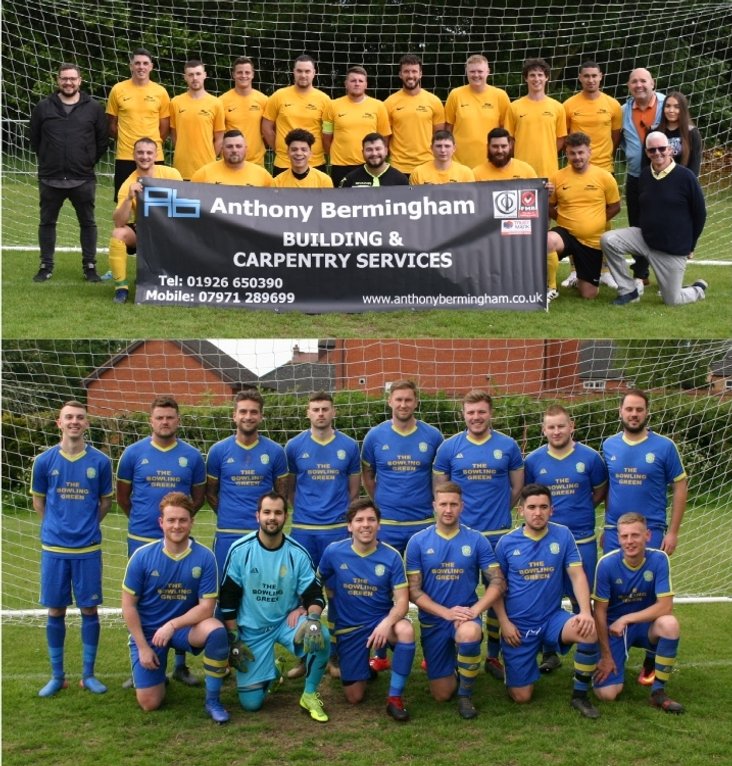 This galvanised Westlea, who replied immediately. From a dangerous delivery from a free-kick, it was Spencer Bradley who rose highest to head home to level the score at 1-1.

Westlea looked dominant in the air all over the pitch, looking very threatening from set-pieces, and despite Bishops battling in midfield, it was Westlea who took the lead after twenty-seven minutes. Having looked dangerous from previous corners, it was no surprise that a dangerous corner was won at the back-post and headed back across the goal where Michael Ellis rose above his marker to head in Westlea’s second goal.

Both sides had good chances during the next quarter of an hour – Adam Knight shot just over when he broke through the Westlea defence, and Elliott Powell came close as he attempted to chip the ‘keeper. However, it was Ryan Palmer for Westlea who extended their lead just before half-time when he broke through the Bishops back-line, and calmly put the ball round the advancing ‘keeper to give Westlea a 3-1 lead going into half-time.

Worse was to follow for Bishops. Straight from their kick-off at the beginning of the second-half, Westlea won back possession, and James Footman evaded a couple of tackles before slotting the ball into the net to give Westlea a 4-1 advantage. 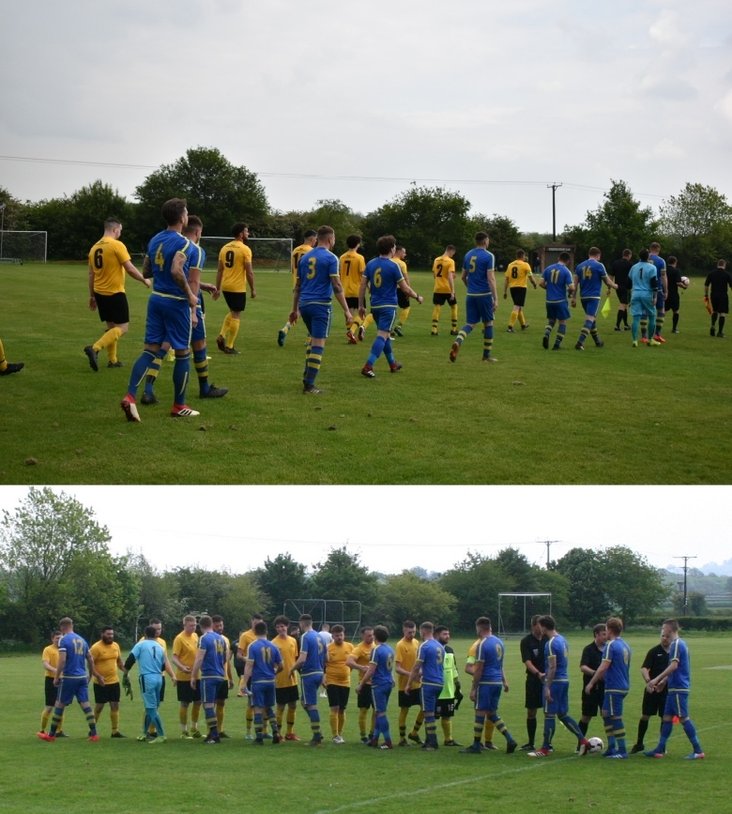 As Bishops pressed to get back on terms, five minutes later it looked like the game was all but over. From a Bishops corner, Westlea broke with devastating pace – Elliott Powell leading the charge before selflessly squaring the ball for Ryan Palmer to finish the move and grab his second goal.

At this point, with a four-goal deficit, Bishops looked out of the game. However, to their credit, they showed real character and stubbornly kept up the pressure. Just before the hour-mark, it paid off as Adam Knight capitalised on a goal-mouth scramble and poked the ball into the goal after an initial save by the Westlea goalkeeper to give Bishops a fighting chance in the last half-hour with the scoreline at 5-2.

As Bishops pushed forward, they were in danger of being caught at the back, and had a lucky escape a few minutes later. Ryan Palmer evaded a clumsy foul, and squared the ball across the 6-yard area, only for Ryan Woodward’s side-footed effort to be blocked on the line by a defender. At the other end, it was a similar story for Adam Knight as he managed to get round the ‘keeper but couldn’t force his shot past the Westlea defender.

With the game looking to be over, Bishops’ exertions were taking their toll and Westlea looked in control. However, an exciting end to the game was ensured when referee Martin Dempster awarded a penalty to Bishops, which Adam Knight duly despatched for his hat-trick. 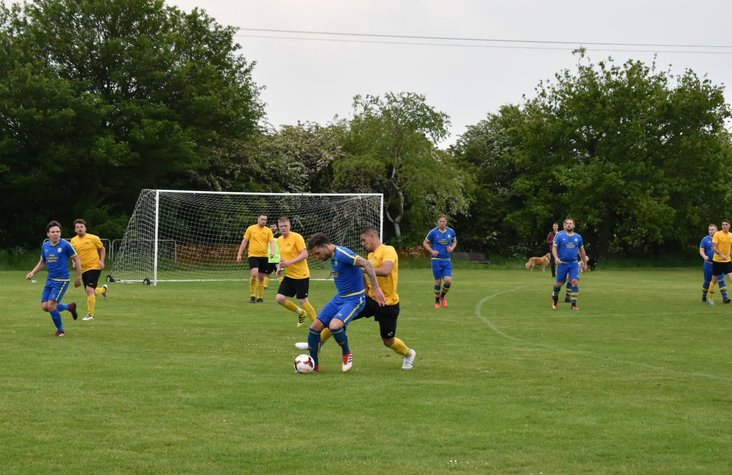 However, with five minutes left to play, and still two goals behind, it was too much for Bishops, and Westlea saw the game through to claim yet another title with a 5-3 scoreline.

The trophy was presented at the end of the game by David and Roger Thomas, sons of Tracey who founded the Cancer Cup in 1963. The Cancer Cup was Tracey’s passion and has now raised £60,000.

Thanks also to Stockton FC for the use of their ground, and to the men in black - Martin Dempster, assisted by Mark Beverley and Rob Daffern.

Finally, special thanks to Lillie Cummings for her excellent photos from the game, which can be viewed here. 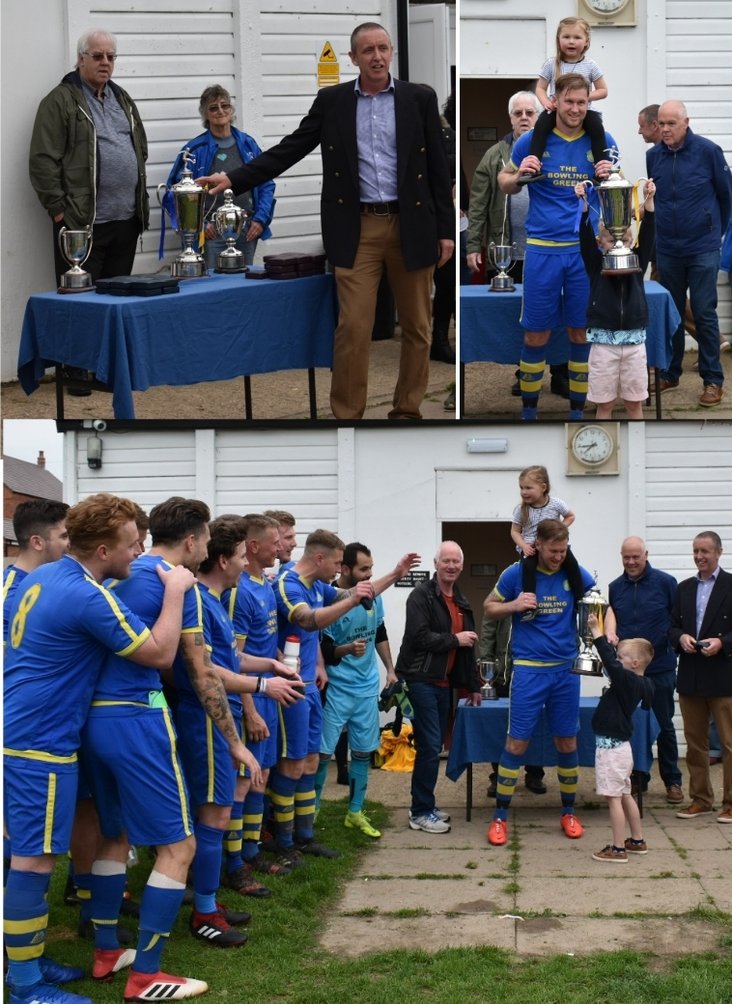