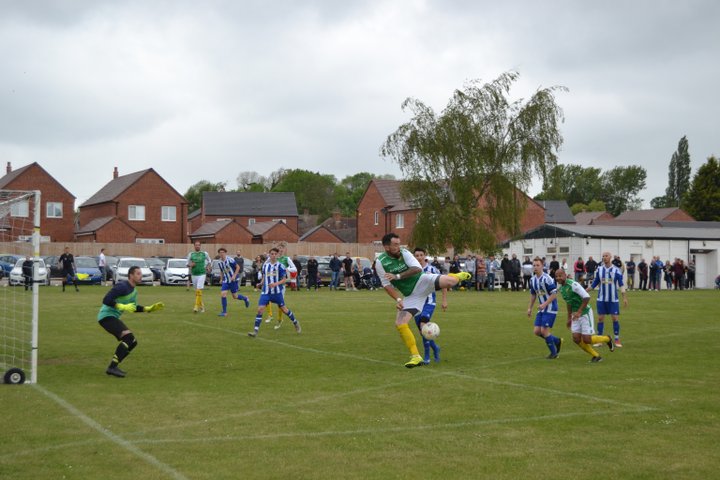 We finalise things for this Season with the final game from Division 1 which was a Table Top decider. 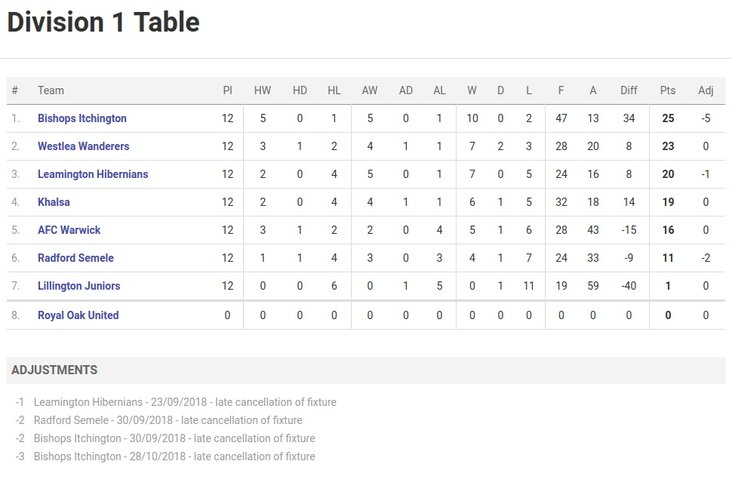 Having already won the Tracey Thomas Challenge Cup, although Westlea Wanderers started the day at the top of the table, Bishops only needed a point to clinch the title (and secure a treble of League, Division Cup and George Dutton Challenge Cup), whereas Hibs needed a win to be in with a chance of any silverware this season.

A fast flowing attacking game as expected ensued, with a large crowd gathered enjoying the spectacle. Bishops still looked the brighter in the first 30 minutes and it was no surprise when a smart move down the left saw Jonny Byrne finish smartly at the near post. Bishops continued to push but Hibs held them off and that’s how it looked to be finishing the first half, until Hibs broke down the right and won a corner. From the ensuing kick, a goalmouth scramble and a debated handball. Penalty! The scores would’ve been level at half time. It was blazed over the bar. Bishops went in at half time with their one nil lead intact.

Hibs looked brighter from the start of the second half and pressure was starting to tell. Bishops were holding on and starting to fade. With several goal mouth opportunities an equaliser looked on the cards. Forays down the flanks were creating chances inside the Bishops box, but they held tight. With the pressure all at one end, Bishops started to find their feet again and created three excellent chances to extend their lead but the Hibs keeper did well to deny them. Despite all the pressure at both ends, there were no more goals in what was an excellent game to watch and well officiated. Thanks also go to Stockton FC for the use of their facilities for this game.
Congratulations to Bishops Itchington who win the Division 1 Title.

Quick re-cap of the rest of Division One
Throughout the season, Khalsa kept the pressure on the top three of Bishops, Leamington Hibs and Westlea, and at the other end of the table, the jump from Division Three turned out to be too much for Lillington Juniors who struggled in their first season in the top flight. 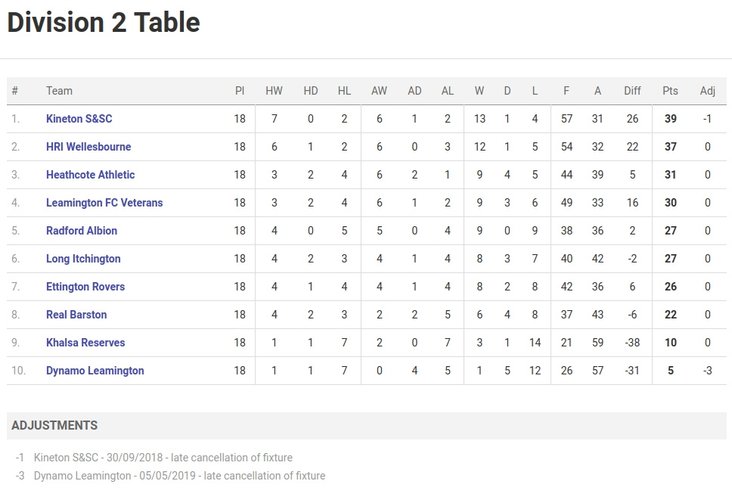 Meanwhile, the outcome of all the other three leagues had already been decided.

Division Two went all the way – a 0-0 draw between the top two teams in the final game last week meant that Kineton S&SC, who had already picked up the Cancer Research Supplementary Cup, narrowly edged out HRI Wellesbourne (who had secured the Division Two Cup back in April), to take the top spot.
There was very little to separate the mid-table teams, but Khalsa Reserves and Dynamo Leamington both struggled, with Dynamo only managing one win all season.

In their inaugural season, Bishops Tachbrook (pictured below with the trophy) romped the Division Three title. Bishops, who were also runners-up in the Cancer Research Cup, eventually won this league with a very convincing 11-point gap over Harbury, who just secured second-spot ahead of Chadwick End and Hampton Magna. At the other end, it was Castle Rangers who remained without a win all season.

The Division Four title was another tight affair. In a very impressive first season, Chadwick End Reserves pushed all the way, but eventually missed out by a solitary point, leaving Blackdown, also in their first season, to take the title. Leamington Hibs Reserves held on to third place, making it a 1-2-3 of teams in their first season. With Joiners Arms folding shortly into the New Year, it was two other Reserves teams propping up the table - HRI Wellesbourne and Lillington Juniors - both of whom suffered with points deductions. 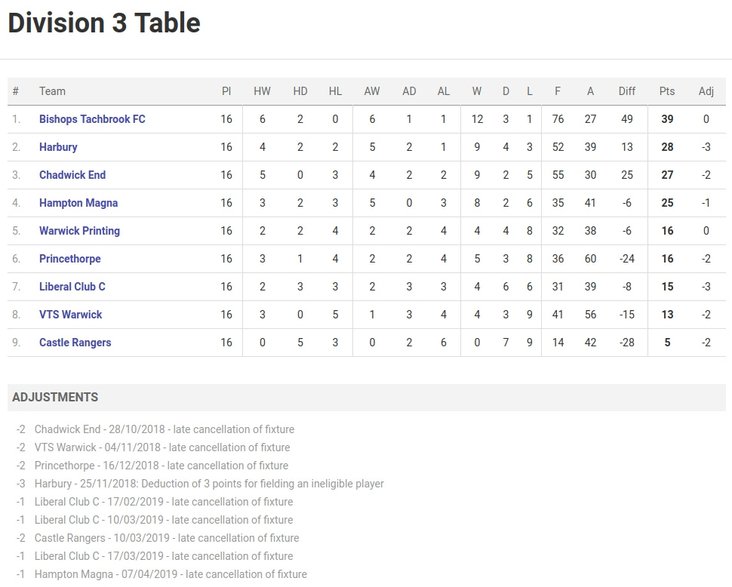 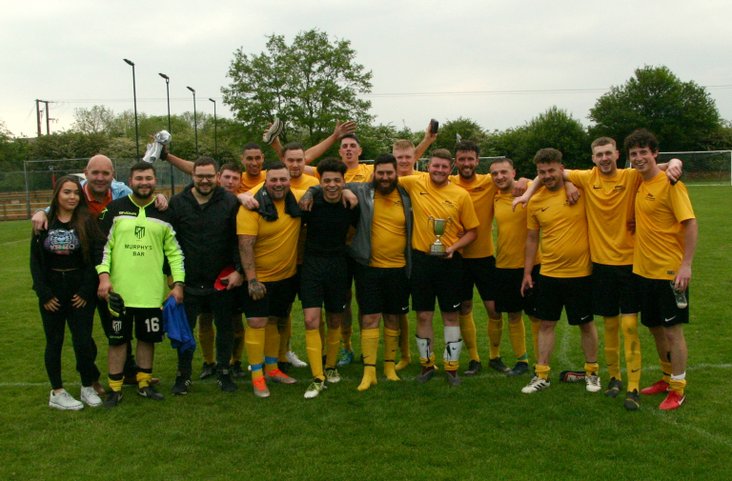 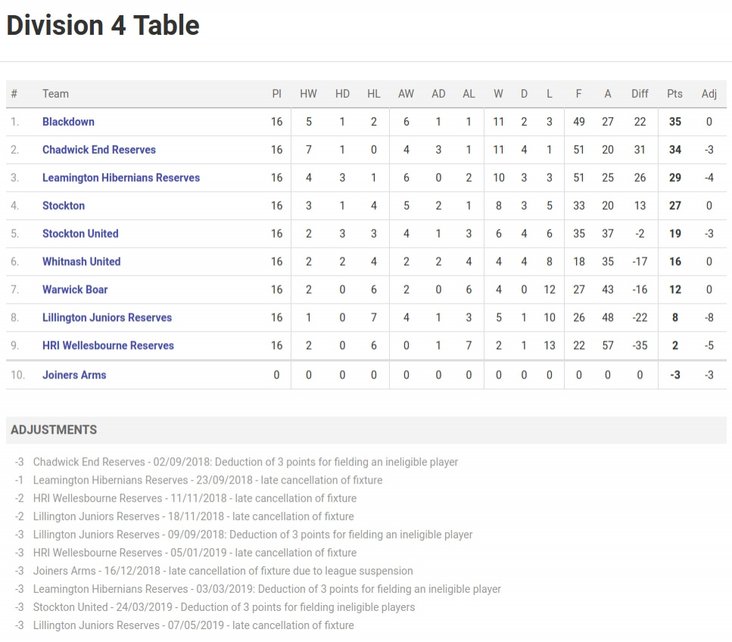