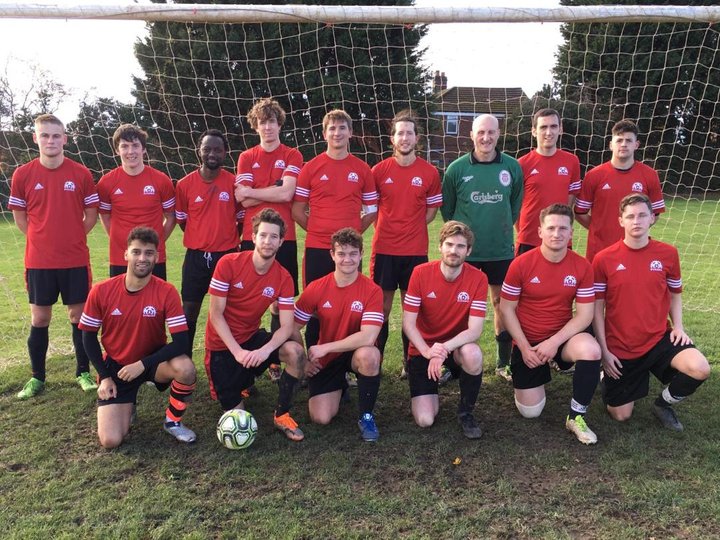 All the goals and the action from this weeks matches.

This week’s round-up starts as usual with the Cup Competitions. However in a new twist we are starting with a new feature “Match of the Day”. For that game we have the Division 2 Cup Semi Final between Long Itchington and Dynamo Leamington.
Division 2 Cup, sponsored by Rye Hill Service Station 2018-19 - Semi-Final
Long Itchington 1 Dynamo Leamington 1
A game of two halves here which either side could’ve won. The pitch was in great shape. Referee Ian Sewell in charge. The low winter sun made it ideal for Sunday morning football. Not too cold and the rain held off. With Dynamo playing towards the Marton end to start , with a slight wind to their backs and the sun behind them it was a question of time before the Long Men conceded. A break down the right wing resulted in a freekick to Dynamo close to the corner. Seb Burton somehow managed to place his spot kick into the net! Though they had plenty of pressure Dynamo failed to increase the lead.
Half Time : Long Itchington 0 Dynamo Leamington 1
The change of ends brought The Long Men to life and they started to dominate the play. The Dynamo keeper kept them in it but it wasn’t to be. Todd Howarth rose like a Salmon to sweetly head home, but it was disallowed for a push in the box. A thundering long range shot hit the bar. Shortly after, another pressing move and another great save from the keeper but he could only push the ball out to a swooping Sam Crawford who was first to react and nodded home from 3 yards. It seemed odds on that Long Itchington would seal the tie but Dynamo held on.
Full Time: Long Itchington 1 Dynamo Leamington 1
So to penalty kicks. Dynamo went first and missed! The rest of the Dynamo players held their nerve and Long Itchington missed twice. An entertaining and sporting game well reffed. Dynamo progress into Division 2 Cup Final, where they will meet HRI Wellesbourne.

We move on to our regular round-up and start with the Division 1 Cup, sponsored by Anthony Eden Gents Hairdresser 2018-19 - Semi-Final

Bishops Itchington 8 (eight) Lillington Juniors 0
This was a one sided affair. Johnny Adair led the way with a first half hat-trick. Adam Miles and Tom O'Callaghan got a brace apiece , with Stefan Grudzinski rounding off the scoring with a single on 82 minutes. Bishops will face Khalsa in the final.

Leamington Hibernians 1 Khalsa 1
A tight one here with Dave Benton getting a 75th minute equaliser for Khalsa. Khalsa took the tie 1-4 on penalties. They now face Bishops in the Cup Final.

We move on to the Division 2 Cup, sponsored by Rye Hill Service Station 2018-19 - Semi-Final.
Winners of this game to face Dynamo Leamington who won our featured game today, in the Final.
HRI Wellesbourne 3 Radford Albion 1
Carl Ellard got HRI off to a great start scoring on 5 minutes. Falusi Boluwatife and Andy Tomlin got the others to see the Veg boys through to the Final.

We move on to the Division 3 Cup, sponsored by Nick Chambers in Memory of his Father Chris 2018-19 - Semi-Final

Hampton Magna 2 Chadwick End 0
Michael Jefferson and Thomas Wright getting the Magna goals in the second half.

Chadwick End Reserves 3 Blackdown 2
A real ding dong game here. Chadwick have a Steve Ebdon brace to thank. His second sealed the win with a penalty on 80 minutes. His first had put them ahead only for Jeevan Fermahan to level ten minutes later. Thomas Wale restored the Chadwick lead swiftly followed by a Jamie Campton equaliser to keep Blackdown in it. Up popped Ebdon with ten minutes left to see Chadwick into the Final.

We move on to the Cancer Research UK Charity Invitation Cup 2018-19 - Round 1
Warwick Printing 3 Stockton 2
The Printers move into the next round. Cory Turner leading the way with a brace. Kyle King grabbing the other. Sam Gilbert had set Stockton on their way but it took 85 minutes for Daniel Brown to get their second. The printers held on for the last few minutes.

Bishops Tachbrook FC 2 Radford Semele 1
A giant killing act here as Division 3 Tachbrook progress at the cost of Division 1 Radford. Adam Knight doing the damage with a brace. Seb Rockliff getting the Radford reply within a minute of the second Knight strike.

The Tracey Thomas Challenge Cup 2018-19 - Round 3
Khalsa Reserves 0 Kineton S&SC 2
Liam Naven-Jones and Callum Graham on target here to put Kineton into the next round.

Ettington Rovers 2 Leamington FC Vets 4
Charles Reynolds and Jason Peggram on target for Ettington but the Vets were too strong here. A brace from Ross Jackson and the odd ones from Alan Robinson and Roland quinlan took the points for the Vets.

Princethorpe 3 Harbury 9 (nine)
Harbury consolidate their lead at the top of the table with this one sided encounter, whilst Tachbrook were engaged in Cup heroics. James Hancocks and Ryan Butler both grabbed hat-tricks, Brad McKinty with the fastest goal of the day had started it off on 2 minutes, Ryan Walton and Rheece Cleary rounded it off.

Last but by no means least we move on to Division 4
Lillington Juniors Reserves 2 Leamington Hibernians Reserves 3
Jamie Hickey on target for Juniors . Liam Bullimore and a Harry Davies brace were enough here for Hibs to take the points and top slot in Division 4, above Blackdown who have games in hand.

Warwick Boar 7 (seven) Joiners Arms 0
Tommy Williams led the way here in this one sided affair. His hat-trick coming in the first 35 minutes. Mark Hickey, Matthew Lee, James Williams and Macauley Easterlow getting the others.