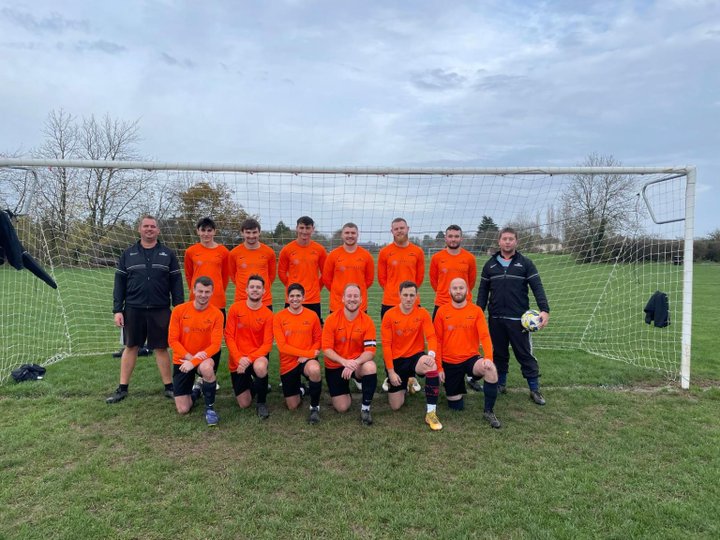 ASll the results and goals from today.

Weekly roundup for Sunday 27 November 2022. We have League and Cup games to cover.
We start with the George Dutton Charity Invitation Cup 22-23 - Round 1
Ettington Rovers v Real Barston.
This game was abandoned after seventy minutes when Barston player Jacob Turner suffered a broken leg. Our thoughts and best wishes to Jacob who only started playing for Barston this season.

HRI Harbury 5 Wellesbourne Wanderers 0
HRI were resplendent in their new kit curtesy of sponsors Reynolds Blinds of Leamington. It clearly worked as they were in control here. Three Ellard bothers, Bret, Aaron and Carl were all on the teamsheet for HRI but it was Greg Eales who was celebrating his recent marriage with a hat trick! His first a great header from a cross from Bret. Aaron popped up with a great finish from the edge of the box. The final goal coming after a Vitor Machado corner went straight in after it came off a defender. Wellesbourne always threatened but couldn’t find the net. HRI Harbury into the next round and Wellesbourne go into the supplementary Cup.

Hampton Magna 0 Cubbington FC 3
Three second half goals sealed the win for Cubbington here. Luke Swinnerton with the first shortly after half time. As Magna pushed for an equaliser gaps opened up and two late goals from Sam Smith and Alexander Badger finished it off. Cubbington progress and Magna go into the Supplementary Cup.

Long Itchington 2 Leamington Hib’s Res 0
Long Itchington showed their higher Division status here and Hib’s couldn’t break them down. A brace from Michael Clement were enough to tale the Long Men into the next round. Hibs Reserves go into the supplementary Cup.

Princethorpe 1 Leamington Hib’s 4
Ash Kitchen got the ball rolling here with the second fastest goal of the day after only two minutes. Kitchen got his second with only four minutes left on the clock. Adam Johnson and Connor Carson with the other goals. Hib’s join the reserves in the next round and Princethorpe into the supplementary.

We move on to the Division 3 Cup 22-23, sponsored by Nick Chambers, in memory of his father Chris - Round 1

Kenilworth Royal Oak 7 Kineton Sports and Social Club 1
Fastest goal of the day here for Robert Ormston in the first minute to get the Oak started. Jeremy Simmons then bagged a brace before half time. Owen Biggs then added a second half hat trick in a twenty three minute spell and Harry Green wrapped it up with two minutes to go. Brayden Herdman with the Kineton consolation.

Chadwick End 5 Engine FC 3
Connor Ratcliffe gave Engine a start here but Tom Tarbuck had made it all square by half time. Five minutes after the re-start and Chadwick had scored twice more. Mark Turner and Rhys Edwards with the goals. Tarbuck added a fourth before Leo Parnell-Notice pulled one back. With ten minutes to go Charlie Cleaver gave Engine some hope but Callum Bennett finished it off.

Cubbington Albion 4 Napton 0 [/b
Dan Bates on the scoresheet again here and his strike set Albion on their way. A brace from Max Gough and one from Ross Quartermaine were enough to take the points.

[b]We finish as usual with Division 4

Balsall & Berkswell 0 Foresters 2
A close game here and The Hornets were always in the hunt. Josh Marshall with the first goal after only six minutes and chances went begging at both ends. James Farmer wrapped it up with a thumping header from a corner with three minutes left on the clock and the Woodmen held on for the points and second place in the table.

Bowling Green 6 HRI Harbury Reserves 0
A hat trick for Callum Stout here supported by other goals from Noah Whitlock , Claude Ovington and Benjamin Wilson getting the others.

Newbold 2 Long Itchington Res 1
A mid table battle here and Newbold came out on top. Jordan Bedford gave the home side the lead after only eight minutes. Ryan Palmer added a second after the break. Kieran Seager pulled one back just past the hour mark but Newbold held on to take the points.

Wellesbourne Wanderers Reserves 1 AFC Snitterfield 6
A hat trick for Talib Kargbo led the Snitterfield charge here. A brace from Harry Jones and the odd one from Neil Wilson doing the damage. James Sanderson with the late Wellesbourne consolation.

HRI Harbury in their new kit.