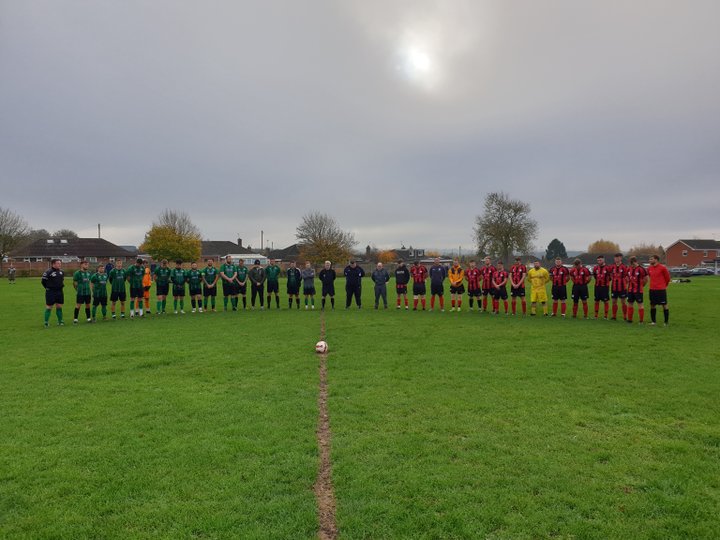 All the results and goals from today.

Weekly round up for Sunday 13 November 2022. Clubs remembered the fallen before games this morning with a minute of silence.

We have plenty of games to go through and we start as usual with the cup games.

Chadwick End 0 Khalsa 1
Khalsa progress into the next round thanks to an Andrew Hood strike five minutes after the re-start.

Long Itchington 2 Leam Hib’s Reserves 2
Hib’s reserves were two up after the half hour mark through Connor Mort and Jack Avery, but the Long Men pulled one back through Matthew Bailey just before half time. That’s how it stayed and it looked like The Long Men were going out! With only three minutes to go up popped Bradley Allibone to make it all square and take it to penalty kicks.
Long Itchington win 5 - 4 on penalties and go into the next round.

Engine FC 6 Balsall and Berkswell 0
One way traffic here and William Benton started it off after ten minutes. Connor Ratcliffe added a second before the break. Luca Valle helped himself to a brace in a five minute spell, then Harrison Wright and Jasdeep Singh Muttu wrapped it up in the last minute. Engine go into the hat for the next round.

Khalsa Reserves 5 Ettington Rovers 1
A brace from Suroush Lisle-Pourzyale had given Khalsa the lead. Harry Goodfellow then pulled one back for Ettington shortly after the re-start. Istvan Demeter then restored the two goal advantage . Twenty minutes later and Luke Warby added another and three minutes that Manraj Khangura wrapped it up. Khalsa reserves into the next round.

We move on to the Division 3 Cup 22-23, sponsored by Nick Chambers, in memory of his father Chris - Preliminary Round

Sporting Foresters 3 Kenilworth Royal Oak 5
A ding dong goal fest here. An own goal after thirteen minutes gave Oak the lead. Liam Miller had it all square a minute later. William Harte then struck on the half hour to restore the Oak advantage. Seven minutes later and it was all square again via a Daniel Eykyn goal. Matthew Joyce then popped up just before the break to give Foresters the lead. Within ten minutes of the re-start and The Oak were back in front. Harte with his second swiftly followed by Owen Biggs. Harte grabbed his hat-trick with twenty five minutes to go and that’s how it stayed. Royal Oak into the next round.

On to the Division 4 Cup 22-23, sponsored by Spa Trophies – Round
1
Stockton 9 {nine} Wellesbourne Wanderers Res 3
Josh Tolley helped himself to a hat-trick in a ten minute first half spell to set Stockton on their way. It stayed that way until the second half when Ryan Barnard added a fourth five minutes in. Wellesbourne responded with two goals in two minutes from Joshua Duffin and George Deeley. Tolley then responded with another brace of his own. Sam Rose and Alexander Boulden then added two more for Stockton before Duffin got his second. Rose got his second at the death and Stockton progress.

We move on to League action now and we start as usual with Division 1
Leamington Hibernian 0 Bishops Itchington 3
The Bishops were on top here, Ciaran Houston and Michael Clough had both scored before half time. A last minute strike from Kasey Smith rounded it off.

On to Division 2
Pig and Fiddle 7 AFC Warwick 1
Second fastest goal of the day here for Sam Perry after seven minutes. Thomas Thwaites-Miles made it all square going in to the break. Jake McCarthy-Phillips gave The Pig the lead on the hour mark and it became one way traffic. Perry got his second five minutes later. Pedro Fernanades then helped himself to a brace inside the next eight minutes. Liam Blake added the last with ten minutes to go. Pig continue their 100% league record and start to climb the Table.

Princethorpe 2 Dynamo Leamington 1
A late Callum Carsley brace doing the damage here after Ashley Rowley had scored for Dynamo, who lose ground with the front runners.

Cubbington Albion 3 Hampton Magna 0
Daniel Bates with a spot kick after fifteen minutes gave Albion a first half advantage here. Magna held it tight until with only twenty minutes left Nick Brunton met a driven cross from Lewis Papworth and his bullet header screamed into the top corner. Ross Quartermaine added another ten minutes later to seal the points. Cubbington squeeze up the top of the table as Magna drop points for the first time this season.

Real Barston 2 Kenilworth Wardens 1
Dan Twigger had given Wardens the lead here but Barston came back in the second half with goals from Christopher Gould and Benjamin Valatka to take the points.

Wellesbourne Wanderers 3 Cubbington FC 2
A Luke Swinnerton goal for Cubbington was sandwiched by a Joshua Kilbride brace for Wanderers before half time. Max Dale extended the Wanderers advantage just after the break, Jack Gibson grabbed another for Cubbington with five minutes to go but Wanderers held on.

We round off as usual with Division 4

Bowling Green 2 AFC Snitterfield 2
Neil Wilson put Snitterfield ahead only for Dan Whiting to level after only four minutes. Callum Stoutt then put Bowling Green ahead on the hour mark but Wilson grabbed his second with fifteen minutes to go to give Snitterfield a share of the spoils.

HRI Harbury Reserves 2 Southam Sporting 5
Keir Wood and Cameron Hill gave Sporting a first half lead. Vitor Machado pulled one back shortly after half time. Joshua Thomas then rattled home a hat trick in just over twenty minutes to nail it for Sporting before Dale Francis added a very late consolation for the veg boys.

The Builders 1 Long Itchington Res 7 (seven)
Fastest goal of the day here for Kieran Seager on six minutes. Before the game was over he’d helped himself to five! Niall Thoms bagged an early leveller for Builders before the Long Men took control. Dominic White and Seb Jones also added late on to seal the points.

Cubbington Albion and Hampton Magna pay a respectful minute of silence before kick off today.

 Latest weekly round up. 20.Nov. 22 All the results and goals from this weekend.