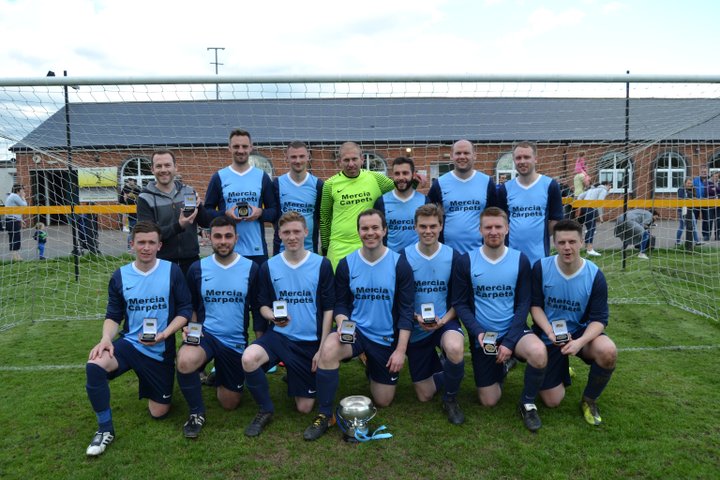 All the highlights from the action today including the Division 2 Cup Final.

Sunday 22 April 2018 . And we start this weeks round-up with the Division 2 Cup Final, sponsored by PMC Financial Services 17-18
AFC Warwick 2 Real Barston 1
The Racing Club pitch looked in good form despite the overnight rain. And our thanks go to Racing Club Warwick for the use of the facility. AFC were looking to add the Cup to the League title, which is almost within touching distance now following the Leamington Vets defeat this morning to the Police. Real Barston started the brighter with some neat football and AFC looked out of sorts. Against the run of play AFC took the lead shortly before half time through Ricky Barby. The second half saw AFC grab an early second goal through Daniel Long, who raced through to slot past the Barston keeper from close range. Barston still had chances and it was no surprise when Luke Durstan pulled one back in the dying minutes but AFC held on to take the Cup. The Cup and awards were presented by Gary Vella Chairman of Racing Warwick FC.
The Officials today were Mark Beverley in the middle, assisted by Martin Dempster and Brian Darby.

Leamington Referees' Association George Dutton Challenge Cup 17-18 - Semi-Final
Warwick Cavern 2 Bishops Itchington 1
High flying Bishops were turned over with goals from Scott Hughs and Marco Oliver. Tom Cooper grabbed an 88th minute consolation to make for an interesting last 2 minutes but Cavern held on to go through to the Final.

Leamington Referees' Association Andy Campbell Challenge Cup 17-18 - Semi-Final
Leek Wootton 3 HRI Wellesbourne 2
Leek Wootton created an upset here but it took a 92nd minute goal from Thomas Griffith to take the win. Andy Legg had put Leek Wooton ahead only for Sam Pye to equalise. Ashley Saines put Wootton ahead again on 80 minutes but Pye grabbed his second and it looked as though penalties were on the cards until Griffith struck in stoppage time.

So now we move on to League Action and as usual we start with Division 1.
Division 1
Westlea Wanderers 4 Khalsa 1
Khalsa scored first through Josh Mann and held the lead into the second half. 4 Goals in 30 minutes turned the game around as Craig Watkin, Chris Hanrahan, Neil Stacey and Ryan Billington scored to keep Westlea unbeaten this Season. 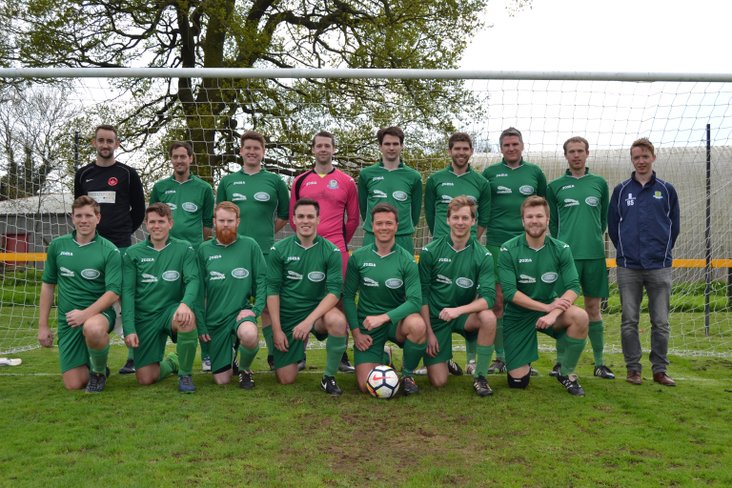 Mid-Warwickshire Police 2 Leamington FC Veterans 1
A tight game here. The Police went ahead from Sam Weaver on 6 minutes but the Vets equalised 2 minutes later with a rifled shot from Dave Care into the bottom left which was too strong for the keeper . Colum Nugent popped up on 71 minutes to weave a mazy run into the Vets defence, and finish from close range skipping past Mark Cheung.

Radford Albion 1 Dynamo Leamington 1
Another tight one here. Sion Humphries getting an 88th minute equaliser for Radford after Joe Gomez had put Dynamo ahead on 70 minutes.

Division 3
Chadwick End 1 Ettington Rovers 0
Ettington dropped points here as Chadwick had Will Gillmore to thank for his 14th minute strike, in a close game.

Lillington Juniors 1 Royal Oak United 4
Royal Oak close the gap to 3 points on Lillington with this win. With three games in hand and a better goal difference the Oak are surely on for a League and Cup Double. Josh Goodwin, Wesley Klopper, Jason Cleaver and Michael Glover on target for Oak. Dimitar Velikov getting the 87th minute consolation for Lillington.

Long Itchington 7 (Seven) Stockton 0
The Long Men were always in control of this one. Sam Crawford grabbing a hat-trick, the others from Elliot Parasmo, Jack Dent, Joe Yeates and Steve Edden.

Stockton United 1 Castle Rangers 2
An action filled 8 minutes to finish here! Conor Warburton put Castle ahead on 82 minutes. Ryan Ward equalised with a Penalty 3 minutes later, only for Paul Saunders to put Castle ahead with another spot kick three minutes after that!