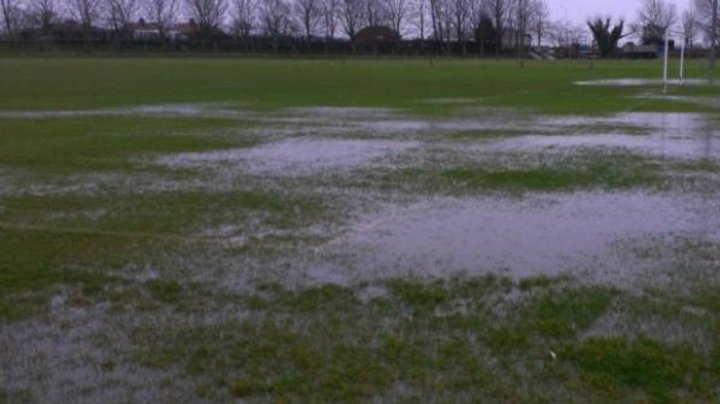 Despite fairly pleasant weather yesterday, the heavy rain earlier in the week took its toll, decimating today's fixture schedule with only a handful of games taking place.

All league games, across all four divisions, were called off... but no doubt much to the relief of the League's Fixture Secretary, a few cup games did manage to take place...

In their third attempt to play their Preliminary Round of the Challenge Cup, Chadwick End hosted Real Barston in what transpired to have been a game worth waiting for - at least as far as the visitors were concerned! Brad Poma put Real ahead after 3 mins, and with Matt Gillett adding another, and Ben Wheeler adding another two, Real were already 4-0 ahead by the half-time break. William Hodgkison, Andy Edgar and Rob Jolly all added another one to the tally in the second half as Real Barston progressed through to the next round with a very convincing 7-0 victory

Meanwhile, Heathcote Athletic travelled to the Warwickshire Police ground for their Round One clash, and the Division Four hosts made life difficult for their Division One guests. Lee Owen gave the Police a 1-0 lead at half-time, before Tom Griffith equalised for Heathcote shortly after half-time. It looked like Chris Collier had done enough to get Heathcote through when he put them ahead with ten minutes to go, but Police got a late equaliser just before full-time with a Craig Marshall penalty. With the scores level at 2-2 at full-time, it was Heathcote that finally made it through 5-4 to the next round on penalty kicks.

Lillington Juniors and Blackdown agreed to "swap" grounds in order to get their Round One game played, and this paid off for Blackdown. The game ebbed and flowed, with Ryan Oldham putting Blackdown ahead, Dale Francis quickly equalising for Juniors, and Jamie Campton immediately re-establishing Blackdown's lead. Ashley Bradbrook and Kieran Walsh each scored to add one more to each team's tally, so Blackdown went into the half-time break with a 3-2 lead. Matt Wright and Jamie Campton added one more each for Blackdown, and although James Cutts got one back for Juniors, it wasn't enough and Blackdown go through to the next round with a 5-4 victory.

In their Round Two clash, Bishops Itchington hosted AFC Warwick in an all Division One affair. Tom Cooper gave Bishops an early lead, before Filipo Mannina equalised for AFC ten minutes later. Jay Morgan added a second for Bishops before half-time, before John Bawn again drew AFC level just before the hour mark. With neither side able to make the breakthrough, 2-2 was how it stayed until full-time, when the game was decided by penalty kicks, with Bishops holding their nerve to narrowly make it through 3-2 to the next round!

Finally, Radford Albion and Long Itchington contested their First Round game in the Cancer Research Cup in an all Division Two clash. Long Itch took an early lead through Neil Milburn, quickly followed by the first of Sam Crawford's goals. Brodie Cullinan and Luke Swinson each got one back for Radford, but Reese Sangha restored Itchington's one-goal cushion before half-time. Sam Crawford added two more in the second half to complete his hat-trick for Itchington, and despite Cullinan grabbing his second, and a late Luke Warby strike, it wasn't quite enough for Albion.
Despite Radford's efforts, Sam Crawford's hat-trick, along with supporting goals from Neil Milburn and Reese Sangha was just enough to send Itchington through to the next round with a narrow 5-4 victory.